“People with goals succeed because they know where they are going…It’s as simple as that.”

Buying real estate continues to be cheaper than renting in the vast majority of major U.S. cities, according to a quarterly rent vs. buy index from real estate search and marketing site Trulia.

The index compared the median list price and the median annualized rent on a two-bedroom apartment, condominium or townhouse in the country’s 50 most populous cities. According to the index, the cost of buying was less than renting in 37 of the 50 cities (74 percent) as of July 1, 2011. About the same share, 78 percent, favored buying over renting in Trulia’s last index report, released in April.

Trulia defines total costs of homeownership to include “mortgage principal and interest, property taxes, hazard insurance, closing costs at time of purchase and ongoing (homeowners association) dues and private mortgage insurance, where applicable. It also includes an offset for the tax advantages of homeownership, including mortgage interest, property tax and closing cost deductions.”

“Many aspiring homeowners are on the fence about renting and buying in today’s market. Should they take advantage of falling home prices and low borrowing costs, or should they continue to rent until the economy stabilizes?” said Ken Shuman, spokesman for Trulia, in a statement.

“Price alone should never be the sole factor in deciding to purchase a home. Instead, buyers should first ask themselves if they plan to live in the home for at least seven to 10 years, could make monthly payments on the house, and have enough cash in the bank for a down payment and an additional six to eight months worth of mortgage payments.

“If you can answer ‘yes’ to each of these questions, then the cost of buying a home definitely outweighs renting in most cities.”

A price-to-rent ratio of 1 to 15 means that it’s much cheaper to buy than to rent in a particular city. Las Vegas, Detroit, and Mesa, Ariz., most favored buying among major cities.

A ratio between 16 and 20 means that it’s more expensive to rent than to buy, but buying may be better than renting “depending on personal circumstances, such as one’s tax bracket,” Trulia said. Any ratio above 20 indicates that owning is much more costly than renting in a city.

According to the index, renting was much cheaper than buying in six cities: New York; Fort Worth, Texas; Omaha, Neb.; Seattle; San Francisco; and Kansas City. 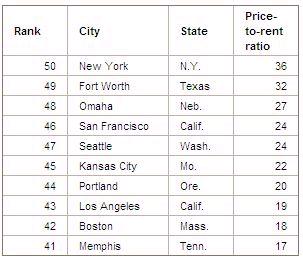 Most foreclosure hot spots saw their price-to-rent ratios drop in the first half of this year, with Detroit seeing the biggest decline, at 39 percent. Miami, however, was an exception. “A mini buying boom created by foreign investors and foreclosure freezes have caused (Miami’s) price-to-rent ratio to jump by 112 percent: from 6 in January to 13 in July,” Trulia said.

Here’s an interactive graph from Trulia that illustrates how cities compare on the rent vs. buy index over the last six months and includes foreclosure and job market data.

Observers say federal and state officials continue to work on a settlement with the nation’s biggest banks with regard to their foreclosure practices, but the process has been delayed as banks seek broad legal immunity for mortgage-related claims.

The banks reportedly are seeking legal protection with regard to loan origination, securitization, and servicing and fair-lending practices, as well as for claims tied to their use of the Mortgage Electronic Registration Systems (MERS), but federal and state officials countered with an offer to cover only robo-signing and other servicer-related practices.

Federal officials hope to forge a settlement by Labor Day, and observers say banks may agree to a settlement approved by 80 percent of states.

HOUSING AFFORDABILITY AT HIGHEST IN 20 YEARS

Housing affordability continued to be near record highs in the second quarter, hovering near its highest level in the 20-plus years it has been recorded, according to the National Association of Home Builders/Wells Fargo Housing Opportunity Index.

About 72 percent of all new and existing-homes sold in the second quarter of the year were affordable to families earning the national median income of $64,200, according to the index. The record high remains 74.6 percent, which was reached last quarter.

“At a time when home ownership is within reach of more households than it has been for more than two decades and interest rates are at historically low levels, the sluggish economy and the extremely tight credit conditions confronting home buyers and builders remain significant obstacles to many potential home sales,” says Bob Nielsen, chairman of the National Association of Home Builders. “That said, however, some housing markets across the country have stabilized and are beginning to show signs of a budding recovery.”

According to the index, Youngstown-Warren-Boardman, Ohio-Pa., was the most affordable major housing market during the second quarter with 93.7 percent of all homes sold found to be affordable to households earning the area’s median family income of $54,900. Other cities ranking near the top for affordability is: Syracuse, N.Y.; Indianapolis-Carmel, Ind.; Dayton, Ohio; and Lakeland-Winter Haven, Fla.

The index found the least affordable market in the country–for the 13th consecutive quarter–is New York-White Plains-Wayne, N.Y.-N.J., in which 25.2 percent of all homes sold during the quarter were affordable to those earning the area’s median income of $67,400. The other least affordable major metro areas includes San Francisco-San Mateo-Redwood City, Calif.; Santa Ana-Anaheim-Irvine, Calif.; Los Angeles-Long Beach-Glendale, Calif.; and Honolulu.

“Not surprising, many home owners took advantage of this low mortgage rate environment and have already refinanced their loans,” says Frank Nothaft, chief economist of Freddie Mac. “The refinance share of applications averaged nearly 70 percent of all mortgage activity in the first half of this year, according to our survey. In addition, an increasing share of refinancing borrowers chose to shorten their loan terms during the second quarter.”

The Mortgage Bankers Association raised its forecast for loan production this year to $1.1 trillion in residential mortgage origination, up $100 billion from its last forecast. Low mortgage rates have brought in higher than expected refinance volume, while purchase volume has been less than anticipated. But put those pennies aside: despite lower rates, weaker projected economic growth in 2012 led to a reduction in MBA’s origination forecast for that year to $931 billion, which would be the lowest volume originated since 1997: MBAForecast.

So the FHA conforming loan limit on forward mortgages is set to drop in October but not so for reverse mortgages. As HUD is not updating median prices at this time, there is no appeal period associated with the change of loan limits on October 1. And “For calendar year 2012, HUD does expect to announce proposed maximum mortgage amounts in November 2011. Once the principles set forth in the Mortgagee Letter announcing the loan limits that take effect on October 1, 2011, there will be no further declines in any loan limits for 2012, absent a change in authorizing legislation.” Complete schedules of FHA mortgage limits for all areas for forward mortgages will be available through the downloadable file links found at LoanLimits with a “frequently asked question site” found at FAQ. Or fire off an e-mail to answers@hud.gov or by visiting Answers. And if that isn’t enough, read the Mortgagee Letter at Letters.

Freddie Mac announced a number of changes in Mortgage Eligibility and Credit Underwriting guidelines last week worth noting. For second homes and investment properties, the borrower will not be allowed to have “any affiliation with or relation to the builder, developer or the property seller for mortgages for newly constructed homes that are purchase transactions.” And for second homes, “each borrower individually and all borrowers collectively must not own and/or be obligated on more than four 1- to 4-unit financed properties, including the subject property. Ownership of commercial or multifamily (five or more units) real estate is not included in this limitation. Rental income from the borrower’s second home or 1-unit primary residence may not be considered as stable monthly income in the credit qualification analysis. The housing expenses related to a borrower’s current primary residence must be used in computing the borrower’s monthly housing expense-to-income ratio.” It is best to view the extensive u/w changes: Freddie.